The Guts to Become a Parent During COVID

Becoming a parent during the Covid-19 pandemic takes guts. No wonder the U.S. birth rate is the lowest it’s been in over a century! Those committing to become parents through adoption and assisted reproduction have inspired me for over thirty years, but they have truly been my heroes during the past eighteen months. 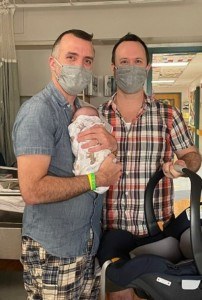 Some I have met only via video conference, yet the intensity of our work on their adoption journey makes it seem impossible that we have not been in the same room together. I finally “met” the adorable babies on my computer screen at final adoption hearings before courts in New York and New Jersey held virtually. My desktop even crashed last month and I needed to replace it – talk about pandemic fatigue!

Those committing to become parents through adoption and assisted reproduction have inspired me for over thirty years, but they have truly been my heroes during the past eighteen months.

Some, like LGBTQ parents, are particularly vulnerable, a vulnerability which the pandemic exacerbated. In one of the most tumultuous adoptions of the Covid era, steadfast hopeful adoptive dads, who had already been through a failed adoption, received a text from their birth mother containing a photo of a newborn baby and claiming an unplanned home birth. Two tortuous days later, during which we did not know whether this was a scam, the birth mother finally took the baby to the hospital, and he is where he belongs – in his adoring dads’ arms. Phew!

Some bravely became parents using assisted reproduction. My lesbian clients used reciprocal IVF for their pregnancy. They created an embryo with the ova of one of them and donor sperm, which was transferred to the other, who gave birth to their child. Under an exemplary, forward-thinking New York statute which was only enacted in February 2021, the Child Parent Security Act, I filed a proceeding for an Order of Parentage, declaring my clients both as the legal parents of the child. In (what else) a virtual hearing before the New York court a couple of weeks ago, the judge entered the Order of Parentage, declaring: “This is only my second hearing under the new statute and I am moved to be able to recognize you as the parents of your child.”

I look forward to the day that the pandemic is behind us, but until then, guts, resilience, and strength will trump the hardships of those becoming parents through adoption and assisted reproduction during Covid.